The gift of ironing 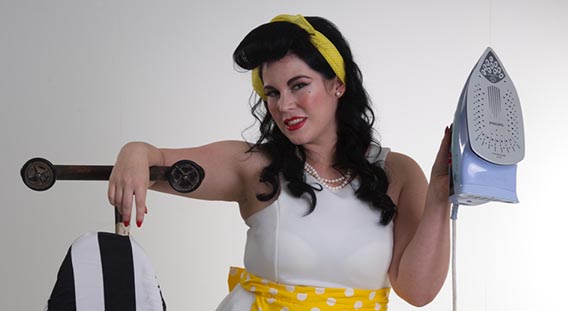 People generally fall into two camps when it comes to ironing … they love it or they hate it. Actually, there are probably three camps because since 1997 there has been a group of thrill seekers who have pursued what they call ‘extreme ironing’. These people iron on mountain tops; in canoes; while skiing; under water and even while parachuting. Documentaries have been made about it and there is now a world championship extreme ironing event.

I doubt this possibility was on the minds of Chinese women over a thousand years ago when they ‘ironed’ stretched cloth by using pans filled with hot coals. As the authors at the Old and Interesting website note, while no one can say when people really began trying to smooth cloth by pressing, early Chinese artwork clearly shows that the coal-pan method was well established. It’s not exactly a method that would translate well to an extreme location today.

Archaeologists have also discovered linen ‘smoothers’ made of dark glass which have been found in many Viking women’s graves and may have been used with smoothing boards However, while archaeologists have discovered many of these across medieval Europe, they aren’t too sure how they would have been used. I think that they’re missing the bigger question here. Why would any woman want to be buried with her iron? That to me is extreme!

It seems that ironing was never the preserve of the rich. The rich probably had better tools, but many homes had ‘smoothers’–often called slickstones in the Middle Ages–which were still being used for small pressing jobs up until the 19th century, long after metal irons were introduced. If you were in a modest household and you needed to press larger pieces of cloth, you might have been lucky enough to own a mangle board and rolling pin. The mangle board was pressed back and forth across cloth wound on the rolling pin. The board was often carved by a young man for his bride-to-be. And so it seems the unfortunate history of giving wives ironing equipment as gifts extends well back into the 15th century.

The flat irons that we’re probably a little more familiar with also began to appear around this time. These were irons that were heated by a fire or on a metal stove. You’d generally need at least two irons for an effective system … one in use and one re-heating. Irons also had to be kept clean, sandpapered and polished to avoid rusting and soiling fabrics. There was also an art to knowing when the iron was hot enough to be effective, but not so hot that it would scorch the fabric.

Finding a way to make a flat iron self heating led to irons with internal burners and liquid fuel; irons connected to gas light fittings or canisters, and finally, in 1880 to the first electric iron. Some less-electrified parts of the world still use charcoal filled irons today, but electric irons’ popularity spread rapidly throughout the world. Johanna Wisthaler who had travelled to the 1893 Columbian World’s Fair and visited the Electricity House to view irons, wrote of them in her book By Water to the Columbian Exposition 1894, “but not only the lady of the house will rejoice; also the poor hen-pecked husband will be in transports of delight, as it will make his path easier in many ways. The constant complaints he was hitherto obliged to endure, will grow mute for ever …”

Well, I’m not sure about growing “mute for ever”, but whether you’re male or female, and you want to make your path easier, we can help with our special ironing deals. We guarantee your ironing won’t be done while bungee jumping from a mountain top, but here in our Ainslie premises with modern, clean and very sophisticated 21st century equipment.

A doona by any other name…

Do you ever think about how lucky you are to have a “10 second bed”?

When down-filled bed covers were first sold in Britain in the early 1960s they were marketed as taking only 10 seconds to make.

This was a foreign concept to many American, Australian and British women in the 1950s who laboured daily over beds made with flat sheets, blanket layers and thin covers.

Yet European households had been enjoying the benefits of feather filled bed coverings for centuries.

Briton Terence Conron (later Sir Terrance) recalls sleeping under a “strange” cover while in Sweden in the 1950s and learnt that it was a down quilt. Less than 10 years later, he opened the British interiors store Habitat and marketed duvets (the French word for down) to “young moderns with lively tastes”.

Down-filled bed coverings were also often called “continental quilts” because they had long been commonplace in continental Europe.

In Canberra, although you will sometimes hear them called duvets, we most often hear them referred to as “doonas”.

I’m a little chagrined to admit that I also call them “doonas” given a recent post of mine about the trademark restrictions on the word laundromat.

One commonly held belief is that “doona” is a brand name used by manufacturers Kimpton in the 1970s, and has become part of our vocabulary like “Band aid” for sticking plaster and “Esky” for insulated cooler. I understand that the Tontine Group now owns the trademark.

Other experts speculate that “doona” comes from the Scandinavian term “dyne”, with a similar pronunciation to doon-eh, and was popularised by IKEA in the 1970s.

Manufacturers rate the performance of duvets (doonas) in togs, a measurement of thermal insulation that you may also have seen on children’s sleeping suits and bags. The higher the tog rating the warmer the duvet.

At Ainslie Laundrette we often say that we can improve the thermal properties of duvets by up to seven degrees Celsius because of the way we launder and dry.

Think about it. If you have ever tried to wash a doona, you probably found that the filling became lumpy and clustered in pockets rather than evenly distributed. Cleaning in this way damages and flattens the loft and reduces thermal properties.

Our careful service has the opposite effect. We can help increase the loft of any type of bed covering including sleeping bags, whether they are filled with down, silk, wool, polyester, cotton or blends. We can’t promise a 10 second turnaround, but we can do it quickly and efficiently.

We also have our own techniques for getting doona covers back on doonas, but if you can do that in under 10 seconds, I’d love to hear your tips.